Indonesia is one of the world's economic success stories of recent years, though the country still has a long development path ahead of it.

After several false starts and having suffered the worst economic collapse of all the countries involved in the 1997-1999 Asian economic crisis, the country has in the past decade and a half succeeded in achieving a sustained recovery.

Annual GDP growth in real terms has been around 6% for the past eight years. While this is not as high as, for example, China, it is nevertheless one of the highest growth rates in the world. 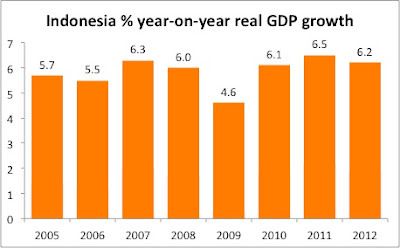 Living standards, though, remain low by comparison with richer neighbors like Singapore and Malaysia. GDP per head calculated at purchasing-power-parity exchange rates is about the same as that in the Philippines and somewhat higher than in Vietnam, Laos, Burma (Myanmar) and Cambodia. 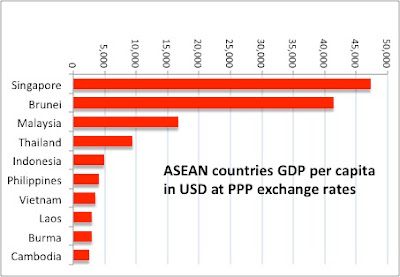 Inflation remains worrying, though it is stable and roughly within the target range of 3.5%-5.5%. Interest rates are high in nominal terms: having edged down to 5.75% for most of this year, they are now not high in real terms, i.e. taking inflation into account. The Indonesian Rupiah continues to lose value gradually against the US dollar, falling to IDR 9,757 = USD 1 today (May 19, 2013).

The budget deficit is growing as the government spends more on infrastructure, but the ratio of budget deficit to GDP -- below 2% in 2012 -- is modest compared with neighbors such as the Philippines, Vietnam and Malaysia, not to mention Japan.

Indonesia has been open to foreign investment since the late 1960s, but major reforms to the FDI framework came after the Asian crisis as Indonesia complied with IMF conditionalities linked to the IMF bail-out.

The civil unrest sparked by the crisis, which resulted in the downfall of Soeharto and the establishment of a functioning democracy, together with the unrest that led to the independence of East Timor, initially deterred foreign investors, but in the past few years Indonesia has experienced remarkable stability. At the same time, China -- until now, the "world's factory" -- has been becoming a more expensive place to locate manufacturing capacity. As a result, FDI inflows to Indonesia have risen steadily (except for a blip in 2009 at the height of the global economic crisis) from USD 6 billion in 2005 to USD 24.6 billion in 2012. 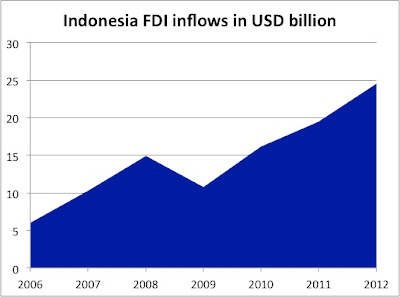 Unlike in China, where FDI never accounted for more than 15% of total fixed investment and is now a much smaller proportion, FDI in Indonesia greatly exceeds domestic direct investment, so it makes a vital contribution to economic growth. For example, in 2012, a typical year, domestic investment was only USD 9.5 billion as compared to USD 24.6 billion in FDI. 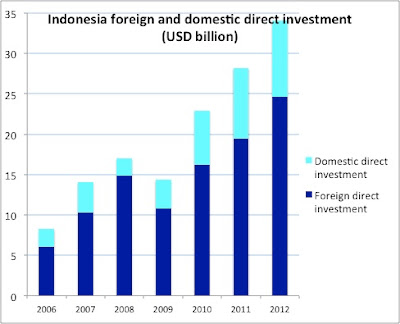 As Head of Global Relations in the OECD's Investment Division up to my retirement from there at the age of 65 in August 2010, I initiated discussions between the OECD and the Indonesian government in  following the completion of the first OECD Economic Survey of Indonesia in 2008 (following several years of informal and tentative discussions with the Indonesian government via their embassy in Paris), which led to the publication of the first OECD Investment Policy Review of Indonesia and its launch in Jakarta in November 2010.

I also co-organized, with my former OECD colleague, John West, of the Asian Development Bank Institute (ADBI), an OECD-ADBI Roundtable on Asia's Policy Framework for Investment: Investing for a Stronger, Cleaner and Fairer Asian Economy in Tokyo in April 2010 at which Indonesia and Vietnam presented their experiences in developing a policy framework for investment, including their co-operation on this with the OECD. Although we did have a short presentation on the Policy Framework for Investment (PFI) developed at the OECD, I thought it best to let two countries with recent experience of working with the OECD within the context of their own policy development processes tell the other countries of their experience. This turned out to be the most effective demonstration of the use of the PFI in practice. By the end of the Roundtable, those countries that had not yet conducted a PFI review with the OECD were literally queueing up to discuss possible reviews with us.

Here is the excellent presentation by Raksaka Mahi, leader of Indonesia's National Team for the Enhancement of Export and Investment, at the Roundtable. I was privileged to work with Pak Mahi in the work of preparing for the Investment Policy Review, which was largely written by my colleagues Steve Thomsen and Misuzu Otsuka, as well as myself. Click on his picture to download the PowerPoint presentation:

The Indonesian government's co-operation with the OECD on the Review was superb. They set up a multi-agency task force to provide support, in particular by commenting in detail on our first draft. The task force was closeted in a room in the Borobodur Hotel where they had to work intensively for a month. This led to a large Indonesia-OECD seminar in Jakarta in early 2010 that was highly focused and transparent, including outside bodies like the World Bank and the American Chamber of Commerce. The task force comments were extremely detailed and helpful in finalizing the Review.

The 2010 OECD Investment Policy Review of Indonesia can be read online by clicking on the cover:

In 2012 the OECD also published its latest Economic Review of Indonesia, which you can read here:

Growing Capacity looks forward to future co-operation with Indonesia in working for all-round social and economic development.
Posted by Ken Davies at 4:14 PM